During the 'Gran Premio del Made in Italy e dell'Emilia-Romagna' and the 'Super Trofeo Lamborghini World Final', the Ravagnan Gallery presents Bruno Catalano's monumental works from the Voyageurs series.

Already exhibited during the 58th Art Biennale in an unusual exhibition spread across six different venues, the imposing statues by the French-Italian artist leave Venice and cross Italy to reach Emilia-Romagna and be welcomed by one of the world's most eagerly awaited and prestigious sporting events.

Moreover, for these contemporary walkers, the condition of perpetual movement, of crossing places and stopping for a given time before leaving again for a new elsewhere, is an integral part of their very existence. Made of a solid and resistant material, bronze, but shattered, torn at the level of the stomach, they pursue their journey, without ever stopping. And it is only in the fleeting breath of the momentary pause that the cut they carry in their bodies, the void that rips the flesh, is filled in an ever-changing way thanks to the textures of the surrounding landscape. Thus, Catalano's travellers, in their eternal wanderings, feed on the spaces they fleetingly inhabit and transform the territories they cross into images.

Like political figures that evoke the heated and current situation of the migrant, these monuments to change narrate the themes of the artist's own existence, uprooted from his native country at a young age and forced to go to sea during his time as a sailor, until his encounter with the statuary art of the great modern and contemporary sculptors, which changed his life.

He says of his art: "In my work I am looking for movement and the expression of feelings; I make new forms emerge from inertia and manage to smooth them out until they are given new life. Coming from Morocco, I too have travelled with suitcases full of memories that I represent so often in my works. They don't just contain images but also life, my desires: my origins in movement."

The sculptures of Bruno Catalano, born in 1960, are present in public and private collections and are among the most appreciated works by today's critics. They write of him:

"In his figurative approach as in the choice of his material, the sculptor, it is true, plays with classicism. Yet he dares the novelty of a gesture in the effect created by the gash that lacerates the bodies. The contrast between the placid faces and the tear that runs down them tells of the cry that runs through these travellers, a silent cry in the manner of Munch. The voids are poignant in proportion to the density of meaning they induce. A metaphorical hole in the interior? Confusion of these travellers grappling with the tragedies of their life's journey? Perseverance on a path regardless of its tears? The power of emptiness unmasks the banality of social appearance. It lays it bare. The nothingness that runs through these homeless lives shatters decorum". (Benedict Sere for Art Critique)

"Travellers do not convey the feeling of the unaccomplished, of the 'unfinished': Catalano includes emptiness as a supporting element of sculpture. In his eyes we find the lesson of Rodin, of his dilated volumes, of Medardo Rosso's research". (Alessandro Zangrando for Il Corriere della sera)

"His original creative history is part of the typical process of expressive renovation of 20th-century art. An original "classicism" of “rediscovered” sculpture, even in the fragmentation and absence of part of the figures". A Michelangelo-inspired “unfinished” practice, which invites the viewers to lose themselves in the background or to complete the design". (Paolo Sasso for Arte e Critica)

The outdoor exhibition will be held at the Misano World Circuit from 22 to 31 October. 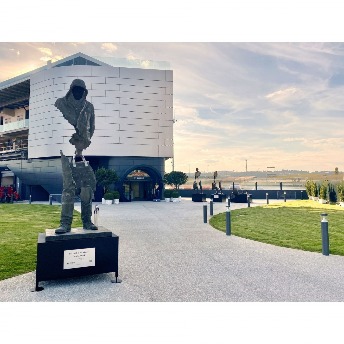 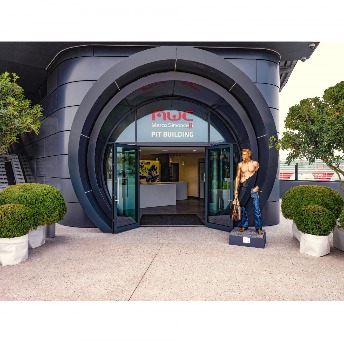