A fascinating marriage of history and contemporary art, the like of which had never been seen before on Lucca’s iconic monument. Bruno Catalano’s “Travellers”, three captivating sculptures that have in fact been travelling all around the world, are now staying in Lucca for a month, and will be visible on the city walls. This exposition is the brainchild of the municipality, and in particular of its councillor for tourism, Remo Santini. It has been realized with the collaboration of the Ravagnan Art Gallery of Venice. This is also the first practical consequence of an agreement signed with the municipality of Viareggio – where the statues have remained throughout the summer.

Catalano’s works are the outcome of an extraordinary process of expressive renewal: in the pieces of luggage carried around by these sculpted characters – who can be seen all along the city’s circle of walls and against the backdrop of San Martino cathedral – there are memories, nostalgia, life’s bonds and troubles, but also hopes, pride and the wish to be alive and to travel. Each baggage has its own individual shape – and the differences contribute to assigning a specific human, psychological and social connotation to each traveller. Every one of them becomes highly and immediately recognizable. It is a very personal and distinctive form of expression: these figures appear, at first glance, to be unfinished, missing as they do some crucial body parts. This forces the viewer to ask how they can even stand. “Les Voyageurs” can also be read as metaphors for the travelling we all need to do in order to mature, personally as well as socially. Many people refuse to listen to the call of adventure because they do not want to leave the safety of the world they know inside out. Facing the unknown is terrible, but it is also the only way to personal growth: starting on a journey around the world, answering the call of the wild, even if it means tearing grief and loss. It may be a way of redeeming oneself, or merely a way back to oneself. In detail, three monumental works (three metres high) will be visible on the walls: “Pierre David”, “J4” and “Khadine” – all of them portraying moving people. Some of the faces seem neutral, others convey nostalgia, yet others the joy of setting foot on land. The respective positions of the statues – one beside the San Regolo barracks, the others only a few yards away and connecting the first to the premises of “Lucchesi nel Mondo” (People from Lucca in the world) – can be seen as paying homage to all our fellow citizens who, in the course of decades, have emigrated to faraway lands to seek their fortune, and have become important figures in their foreign communities.

“We are happy that this project saw the light”, say the tourist councillors for the municipalities of Lucca and Viareggio, Remo Santini and Alessandro Meciani. “This is a bridge between our two cities, which will organize many more joint events in the next few months. The quality of the works speaks for itself. This is certainly an important occasion”. “We are proud of the fact that these works may now be seen in Lucca, a magnificent, international artistic city”, say Chiara and Carlo Ravagnan. “This is a strong emotion which we are hoping to pass on to the tourists and the people in Lucca, who will have an opportunity to enjoy this beauty”. The municipality has organized this installation as a tribute to the great number of tourists and travellers who have been in Lucca this year, and to all those who will visit the city in the future. They will all be able to see a great artist’s works in the best of contexts, only a stone’s throw away from the abode of another great man whose name will be forever associated with Lucca: Giacomo Puccini. 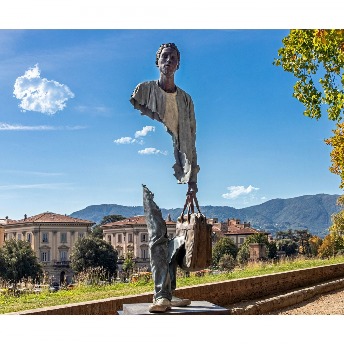 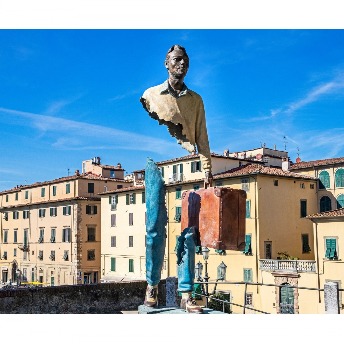 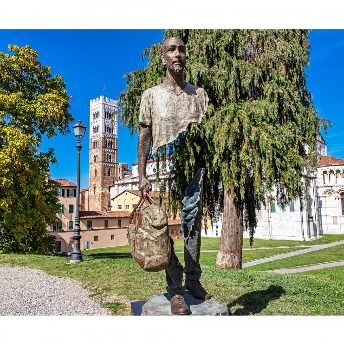