Bruno Catalano’s Voyagers, ‘Les Voyageurs’, are in town. They set ashore – quite literally – at Viareggio harbor, at the Madonnina pier, where they will remain on show until the end of summer. The exhibition is promoted by the Municipality, and has been curated and organized with the collaboration of Venice’s Ravagnan Gallery.

The works in question are three monumental bronze sculptures, approximately 3 metres high – Khadine, j4 and Pierre David – which portray moving, travelling people. Some faces look neutral, others convey sadness and nostalgia, maybe because these individuals have been uprooted and are now forced to travel. All of these people only bring a piece of luggage with them, which they keep closely in their grasp: all the pieces have different shapes – a suitcase, a travelling bag, a mere parcel. These elements give each Voyager a specific human, psychological and social connotation, and somehow help the viewer to “recognize” him.

«In each bag there are memories, nostalgia, the heaviness of life, the bonds that tie, but also hopes, pride and the desire to travel», says Bruno Catalano.

Among the many artistic languages of the twentieth century, sculpture is the one which has expressed most evidently, both in a tactile and in a visual sense, the radical revolution that has marked the restless creativity of that historical period. That revolution has entailed a new fractured organization of forms in space, but also, and above all, the unprecedented use of non-traditional materials, which had never before been admitted into the domain of sculpture. Bruno Catalano’s plastic art is part and parcel of this extraordinary process of aesthetic renewal, and it speaks of the artist’s own personal and distinctive historical contribution to the ideological opposition between fullness and emptiness which is typical of most twentieth-century sculpture.

As a modern artist – i.e., as an artist who is his own contemporary – Bruno Catalano has inevitably accepted that sculpture in his time is in a state of crisis. In this situation, maybe because of one of those “inspired moments of fortuitousness” which have punctuated the course of art history, Catalano has found his own personal and unprecedented aesthetics, which is mirrored in a new way of conceiving plastic art, strongly characterized by a fracturing of the human figure and by the definitive absence of some of its parts. At first sight, therefore, his works appear to be unfinished, visibly lacking in some of their body parts – a state of affairs which forces viewers to ask how they can even stand, not to mention the fact that in these precarious conditions they manage to walk and hold a piece of luggage in their hands.

Even “torn” as they are, his sculpted works retain all the seducing aesthetic and formal possibilities of classical plastic art, and are apt to inspire new and surprising reflections on the nature of poetics and on the dialogue with matter – in Catalano’s case, also with absent, missing matter. It is a lack that brings into play the new role of light in sculpture. In this case light appears to be piercing the figure itself without violence. Quite the contrary: it enlightens it, as one might say, and at the same time it annihilates the physical nature of matter. 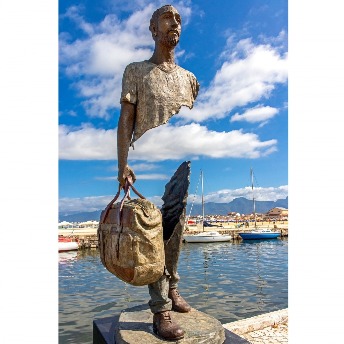 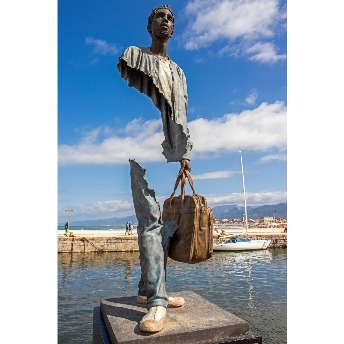 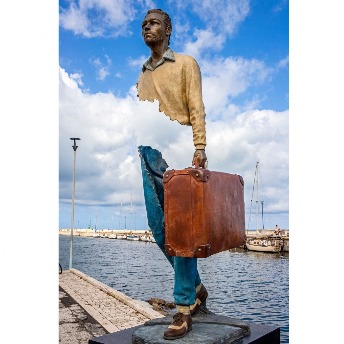